If you are updating the status of a document in a Microsoft Power Automate flow that someone is already using, you will get this error:

and it will return a HTTP Status code of 400:

Below is a method that waits for the file to be free and then moves to the next step:

Wait for the file to be unlocked

Here is an example flow which updates the status of a file stored in SharePoint. If the file is available it will work normally. If it is locked it will loop for an increasing amount of time before attempting the operating again:

Here is how it works:

The expression used in the “Set Variable” step is:

The condition checks to see if the output of the “Update File Properties” resulted in an error code 400 and the error message contained the word “locked”. If both of those conditions are true then documentLocked is set to true, otherwise it is set to false.

Both the status code and message are checked because HTTP Status code 400 is vague and the error might not actually be related to a file lock.

The expression in the delay action is:

This condition checks if the document is locked:

I’ve used this technique a number of times and it’s worked really well, and is simple to implement. 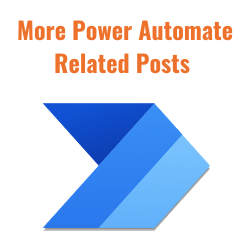