This is a quick credssp registry fix for the following error when trying to connect to a machine using RDP (Remote Desktop):

Run this from an elevated command prompt to achieve the same result:

This registry entry is a temporary workaround until you have patched your server, when you have done that, remove the setting with this command.

If you try to install Microsoft Command Line Utilities 14.0 for SQL Server you may see the following warning:

After seeing this message you install the requested ODBC driver from here. However, the install still reports a missing ODBC driver. But ODBC Administrator will show that it is installed:

The installation requisite is misleading and you actually need to install version 13.1 of the ODBC driver from here:

After you install the newer driver, the SQL Command line Utilities installation will succeed.

When you create a new virtual machine with fresh install a version of SCO Openserver prior to version 5.0.6 you may find that it reports that the license is expired: 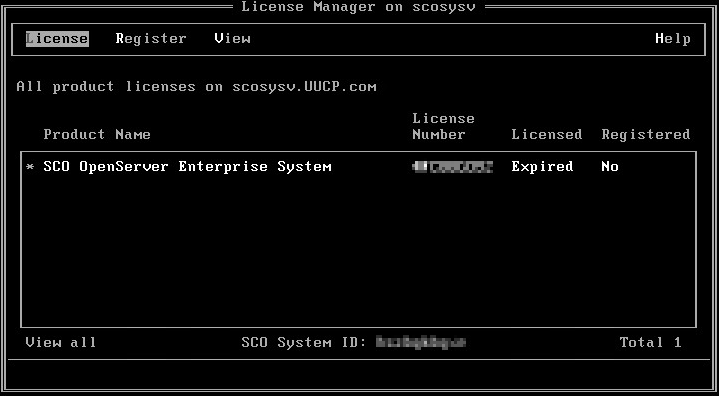 The reason this happens is because earlier releases are not fully year 2000 compliant and if the date the system was installed is after 31st December 1999 then the installation date is incorrect and the license is already expired when you first boot the system. The fix is quite easy:

You should find that all of the licenses are now properly in place.

A customer called me this morning unable to access network shares from Windows 7 machines that have been working for years. The error message was:

Windows Cannot Access \\COMPUTERNAME
Check the spelling of the name. Otherwise, there might be a problem with your network.

This error is caused by windows update KB4480970

As of right now, you can remove the update or workaround the problem by using an IP address instead of a machine name.

The quickest way to uninstall the update is from an elevated command prompt:

You can still access the shares with this update installed by using the IP address of the machine name, but this could be very inconvenient. Example:

Hopefully Microsoft will correct the issue as quickly as possible as this will cause the same problem on Windows 7 and Windows 2008 r2.

The owner of a business using a SCO Openserver 5.0.5 system got in touch requiring urgent assistance with their system. It was unable boot and was continually showing the error message:

At first I thought this would be pretty simple fix:

I talked someone non-technical through the boot process. But he said that the prompt for single user mode was not being shown. So we decided to wait until the IT expert was on site. I still thought this would be an easy fix.

Brad (the IT expert and I) tried once at getting into single user mode, but the prompt was just never shown:

There were no usable backups of the system, so that option was also out.

So there were a couple of different ways we could go:

I decided it would be best to try image the system and restore it to a virtual machine to prevent any potential further damage. This is when we came to the next problem, seriously old hardware! 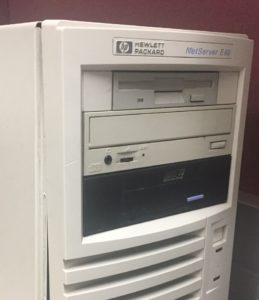 Making a CloneZilla Image of a SCO Openserver 5.0.5 System

Key Problems we faced straight away:

We were able to find an old IDE CD-Drive and put that into the machine. We were then able to boot an old version of CloneZilla.

Although we could boot CloneZilla, it was not able to recognise the network card in the machine, so that option wasn’t going to work either. At least it did recognise the disk, so there was a bit of hope there.

Brad called some local IT shops and we able to locate various bits of old hardware, IDE drives, network cards etc. So we had some more options. We tried the 3com 3c905 card in the server but CloneZilla still didn’t see. This was starting to seem like a hopeless route.

As a last resort I suggested that we try to use the Ubuntu version of CloneZilla to see if that would have any better results at seeing the old hardware. We had to find and download an old release because the recent versions require 256Mb Ram and this machine had only 128Mb. The Ubuntu version of CloneZilla was able to see both the on-board network card and the 3com card, so we began the process of imaging the drive across the network.

I was confident that once the image of the machine was restored into a virtual machine, that the system would running up and running quickly.

The Image was restored into VMWare Workstation 14 and and things seemed quite positive. The machine could not boot because there was no BTLD (Boot Time Load Driver) for the LSI Logic SCSI Controller, I know how get that in place easily.

I used boot floppies and tried to mount the root file system, this didn’t work because SCO was reporting that the Superblock was bad and that the magic number was wrong. After a period of trying different things I gave up and restored the image again, but this time on to an IDE drive instead of a SCSI LSI Logic drive. This was much more successful and I was able to boot the system to the same point the customer was getting with the out of space message.

I Used boot and root floppies to mount the root file system. The root file system had some corruption but fsck was able to take care of that. I then removed enough files to create space to boot the system into multi-user mode. Although it booted, I was unable to get a login prompt. This was because the physical system was originally configured to use a DIGI Serial over Ethernet Server. The serial server generated so many errors that a login prompt could not be shown.

I cleared out the Digi configuration and booted the system using a custom boot string. After that I edited /etc/default/boot to reflect the new drive setups and disabled the existing SCSI driver.

I reconfigured the network, cleaned up the root file system and handed it over to for testing. It all works fine and SCO is now  running on VMWare Workstation 14.

There are still some minor issues to address:

My gratitude goes out to Brad who was incredibly enterprising and patient with the old hardware. I could not have asked for a more helpful remote companion to work on this with me.

Key Points if you are in a similar situation with an old SCO Openserver System that needs recovery.

If you need help virtualizing your SCO system, please get in touch here.